Round Three (Home vs Kareela GC)

The Coast came away victorious in our Round 3 tie against Kareela. Our 2’s and 3’s won comprehensively with Adam Brady and matt Boston winning 6&5 and Mark Millican and Glenn Hetherington finishing on the 12th hole with a 7&6 victory.

Our number 1’s, comprising of Tony de Kievet and Anthony Lloyd came away with a loss against a very determined Kareela Team. The Kareela team played some outstanding golf to upset our number 1 team with the Tony’s going down 5&3.

On to Kareela next for hopefully an away win.

Sunday 07/08/2022 was a typical day at the Coast, a light breeze out of the south and plenty of sunshine. Today was to be the 3rd round of the qualifying for this year’s Gibson Trophy and we were up against Kareela from the Shire.

The team wanted to show they had what it takes to be a competitive group following last weeks close games against Woolooware. The only change to the team was the return of Duncan James to partner with Mark Green.

The front nine was a close game in the 3’s but the 1 & 2’s were taking it to Kareela, the back nine was a different story with our team showing no mercy on the visitors.

I would like to thank Glenn F Grainger who came out and provided excellent advice to Duncan James, to David Quigg for again coming out to act as spotter at various locations around the course.

Next week we play away at Kareela as we strive to make the playoffs.

Round Two (Home vs Woolooware GC)

We were due to play Woolooware away last week, but a rained out game awarded us a draw, so were were chomping at the bit to get started defending the Warren Trophy we won in 2019.

All of our team got off to a positive start winning the first hole. Fortunately for us and unfortunately for our opposition, we managed to stay ahead with no teams being in deficit at any stage during their games.

Well done crew on an impressive start to our campaign.

After being rained out in round 1 The Coast Gibbo’s were really excited to get our season underway against Woolooware. There were some changes due to player unavailability compounded by a late withdrawal. The team turned up on a sunny day to do battle looking resplendent in their recently supplied uniforms.

All teams matched the oppositions with the lead changing hands in all games, the end result was a draw with the team of Geoff Warleigh and Brian O’Toole winning 2/1, Mark Green and super sub Glenn F Grainger going down on the last 1 down and “Captain” Warren Hogan and “Smokin” Joe Bakalich ending up all square.

This week we take on Kareela and again the team is eager to prove themselves.

Round One (Away vs Woolooware GC)

The 2022 edition of the Warren and Gibson Trophy was due to kick off on Sunday 24th July with a trip to Woolooware Golf Club. Unfortunately, due to the recent weather, the Golf Course was unplayable, and both teams had to settle for a half.

Father’s Day at Henrys at The Coast 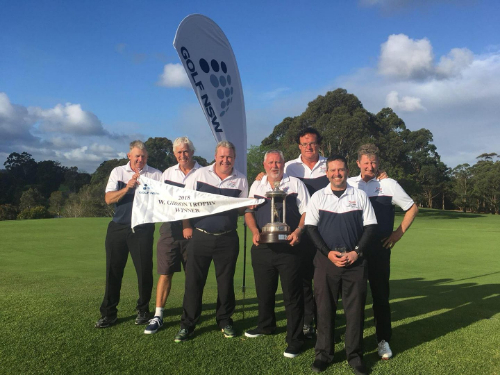