Situated along the rugged Southern Sydney coastline, the Coast Golf Course is open to the elements and can play differently from one hour to the next. It promises to be a challenge for all levels of players, and the Coast Golf Course never lets you down. It suits players of all skill levels, or even just the golfers who like to play on one of the most beautiful scenic courses in Sydney. 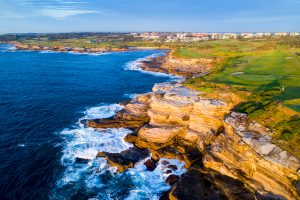 The Coast Golf Club is situated approximately 12 km south of the CBD along Anzac Parade, and 8 km east of the airport. The course is a par 70 oceanfront links that surrounds Little Bay, Sydney’s southernmost City Beach. Uniquely there are ocean views from every hole.

Wind strength and direction are a major factor in the nature of the golf course. Stretching along the coastal cliffs, the course is greatly affected by the breeze prevailing on the day of play. Indeed the first four tee shots are in four different compass directions; due West, East, North then South.

The area was once Prince Henry Hospital, which having been closed  for a number of years was redeveloped into a residential area in the early 2000’s . The Hospital had a golf course since about 1922 for staff recreation. 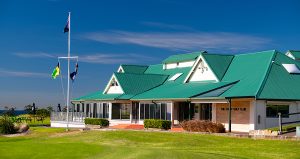 The Club was formed by former Hospital and University employees in the early 1960’s and the golf course was developed from the small layout to a full 18 holes, with a final parcel of land “granted for use” by the University of New South Wales. The former laundry building (circa 1899) was converted into the Licensed clubhouse with renovations in the 1960’s and again in the late 80’s and 90’s

Henry’s at The Coast

The club boasts a popular and well-regarded restaurant Henry’s at the Coast with spectacular views across the golf course, Little Bay and along the coastal sea-cliffs.

After a game or as part of your visit, relax in our recently refurbished, Heritage listed Club House. Lounge and dining areas afford stunning views of the ocean, sea cliffs and beautiful Little Bay cove and sandy beach.

Modern Australian cuisine prepared from fresh seasonal products can be enjoyed from Henry’s at The Coast open Monday through to Sunday.

Lighter meals and snacks are available from the Bar which is well represented by golfers and social visitors alike.

Membership remains in constant demand and new members are always welcome to apply. 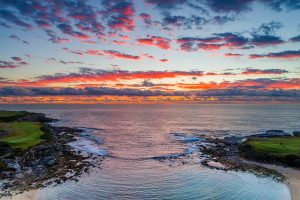 Convenient to the airport and Sydney CBD the course provides the golfer with superb ocean views from just about every playing location on the course. In addition to social play being available each day of the week, members enjoy organised competitions from Tuesday to Sunday with Tuesday, Wednesday, and Friday being an Open Medley event available to affiliated handicap holders.

Guests are welcomed at The Coasts Professional Shop which stocks a wide range of top brand golf equipment and apparel. Available for hire is a fleet of 45 electric Precedent Club Cars.

Prince Henry Hospital commenced it’s working life as a quarantine facility at the end of the 19th Century and was originally quite a remote area of Sydney, toward the end of the tram line to La Perouse, on the beach side of the northern peninsular of Botany Bay. The original hospital at Little Bay was known as ‘The Coast Hospital’ of which the Golf Club later became known. The hospital had a golf course in differing layouts since about 1922 for staff recreation. At various times large numbers of the Hospital staff were under voluntary quarantine, and the isolation of Little Bay discouraged frequent trips away from the hospital.

Many fine golfers hacked their way around the original course, whose holes boasted a series of exotic names: “The Ditch”, “The Coast”, “St.Michael’s”, “The Scrub” (a flagrant understatement), “Hookers Hate”, “The Trap”, “The Bank” (hitting beyond the green and over the road into Ward 22 placed the ball Out Of Bounds), “Herdsman’s Carry” (a par-4 across a patch of matted jungle towards the old herdsman’s cottage) and “Last Hope’.

The course par was set by Jim Ferrier, then New South Wales Champion. Sir Harold Dickinson was CEO of Prince Henry Hospital from 1960-63 and during this time the Board decided to resurrect the golf course, a staff amenity which had fallen on hard times, in order to protect the coastline and preserve the foreshores of Little Bay as open space.

The old hospital laundry was designated to become the Licensed premises for the golf club. The building being a “u” shaped brick construction with the northern aspect in weatherboard. Initial renovations in 1969 filled in the “u” shape to create a function room.

Members volunteered many hours in working bees to form the course into a “respectable” layout and restore areas that had been used as a tip by the hospital. An additional source of labour was provided by the nearby Long Bay Gaol, as the 1966 Annual Report from Prince Henry reads: “With the co-operation of the Department of Prisons, progress was made to restore the foreshores surrounding Little Bay.”

The course was finally an 18-hole layout by the early 1970’s, with native flora being retained wherever possible. Membership was opened up so that people from outside of the hospital and university communities could enjoy the facility.

In order to complement the excellent 18 hole golf course (on which qualifying rounds have been played for the Australian Open the Australian Professional Golfers’ Association Championship and NSW Open) the Board of the day saw the need to upgrade the Clubhouse and it’s facilities.

In 1997 the clubhouse was internally renovated. Heritage consultants, Godden Mackay identified significant aspects to be retained and incorporated into the renovated facility.

As the building had such a long working life, not much of the original 19th Century design had remained intact, however the key features of the iron roof-scape, wooden “A” frame supports and the original style windows were kept as heritage features. The previously hidden vistas to sea were opened up with the enclosure of the balcony and the installation of large windows along the north and east facing rooms. Upgrades allowed the kitchen to now service a 100 seat dining facility which remains very popular as an a la carte restaurant and as function space.

With the closure of Prince Henry Hospital and subsequent development of the site, the course moved into the transitional ownership of Landcom and later was later declared to Crown Lands. The Club was granted a long term lease (75 years) and began its next phase of renovation and upgrade work. The establishment of a residential neighborhood around the golf course led to some course redesign in the early 2000’s chiefly the 7th and 10th holes. The revised layout being a par-70. Upgrades to electrical supply enabled air-conditioning of the clubhouse, a new Pro shop and cart storage facility and many more improvements. Subsequent refurbishments of the Clubhouse have embraced Club heritage, while modernizing the facilities for Club members, local residents and vising patrons who are always most welcome.

The course has continued to improve over the past decade with ongoing improvements to fairway drainage, cart paths and two new greens on the 13th and 9th holes. With the introduction of a bent green nursery in 2014, the Club will continue to replace greens as it become necessary. In early 2017 members unanimously agreed to undertake a $1.4 million replacement of the Irrigation system. Stage 1 of holes 10-17 were completed in late 2017 and the final stage completed in December 2019.